A mandala is a symbolic representation of part or all of the universe. For example, it can represent the home of a specific meditational deity. It is commonly used in meditation practices and as a visual aid in rituals. Mandalas have a circular structure, and most are two dimensional, despite the fact that they commonly depict three-dimensional objects. They can be painted on cloth (e.g. a thangka), wood, or constructed out of sand.

There are at least three different cosmological mandalas in Tibetan Buddhism.

1) Pictured in the header of the website is the so-called "cosmic mandala", which shows the intricate dance of the sun, moon, and other planets around Mount Meru (the axis of the geocentric universe). In this view you are looking down on Mount Meru (a bird's eye view) from such a height that you cannot see any detail in the world below. 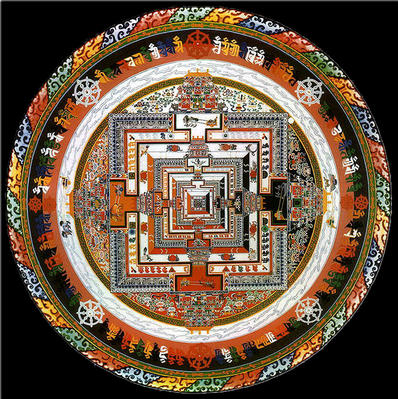 3) The hand gesture (mudra) used in the mandala offering is a symbolic offering of the entire universe for the benefit of all sentient beings.

This YouTube video demonstrates how to make this mudra.

The following prayer is usually recited as part of the offering:

The fundamental ground is scented with incense and strewn with flowers,

Adorned with Mt. Meru, the four continents, the sun and the moon.

I imagine this as a buddhaland and offer it.

May all sentient beings enjoy this pure realm.